Restarting your business will feel like juggling while running a marathon

While many countries and states are struggling with surging numbers of coronavirus cases, others are discussing when to "reopen" again.

Businesses around the world are working on their reopening plans and you can expect a publication on restart measures soon. But before we get there, let's work on answering a "simple" question: When will we reopen?

Let's be clear, there will not be one day on which we return to normal—at least not without a vaccine or cure. Tomas Pueyo described this very well in his "The hammer and the dance," though I feel that "dance" sounds a bit too joyful for what is ahead.

We will likely have a marathon ahead of us through which we will need to juggle quite a few topics while we run. 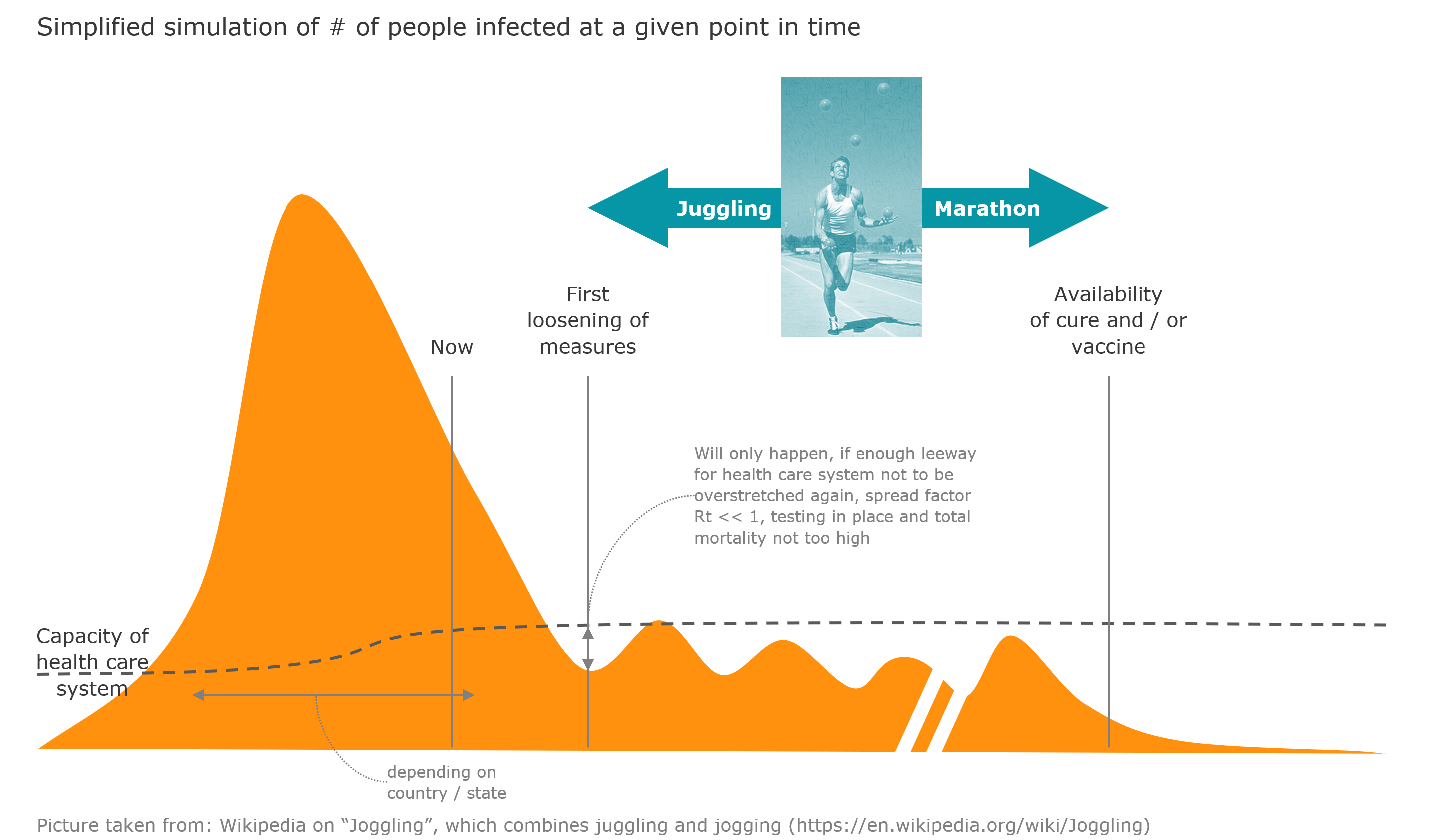 While most have understood by now, that every day that countries (and businesses) let pass before strong measures were implemented, increased the problem, we should also be clear that every day which we wait to reopen significantly reduces the problem. The exponential curve works both ways!

Since no one has experience, what the impact of loosening which measures will precisely be on the spread factor (Rt), there will be trial and error.

Talking of the spread factor, I wanted to share a simplified analogy: If the Rt was a car, traveling a speed of 1, the disease would spread at a constant speed, with the same number of new cases every day. But we want to hit the brakes and only an Rt significantly below 1 and declining, will produce the leeway for politicians to open up again:

Opening up too early carries the risk of a quick and overwhelming second wave. One could fear, that "May is the new March"—since in many countries we are just back at absolute values of new cases/day we saw earlier in the year.

Easing of containment measures MUST therefore come with strong testing and will only be possible when four parameters are met in a country, state, or region:

I can only encourage every business leader, to ask their best data scientists and analysts to build a model specific to their company, to understand, when the above criteria might be met in their region(s).

Data to model the impact is freely available on the net, the math behind this is well understood and combined with the deep knowledge of the respective sector, modeling of scenarios can be done.

Nobody obviously has the famous crystal ball, so my next publication will be around how to think in scenarios and how to restart businesses while running the juggling marathon.

Strong coronavirus measures today should only last a few weeks, there shouldn’t be a big peak of infections afterwards, and it can all be done for a reasonable cost to society, saving millions of lives along the way.
Meet the author
Bernd Brunke
Managing Director
Munich
EMAIL BIO
Read more about
You might also be interested in

The opinions expressed are those of the author(s) and do not necessarily reflect the views of AlixPartners, LLP, its affiliates, or any of its or their respective other professionals or clients. This article regarding Restarting your business will feel like juggling while running a marathon (“Article”) was prepared by AlixPartners, LLP (“AlixPartners”) for general information and distribution on a strictly confidential and non-reliance basis. No one in possession of this Article may rely on any portion of this Article. This Article may be based, in whole or in part, on projections or forecasts of future events. A forecast, by its nature, is speculative and includes estimates and assumptions which may prove to be wrong. Actual results may, and frequently do, differ from those projected or forecast. The information in this Article reflects conditions and our views as of this date, all of which are subject to change. We undertake no obligation to update or provide any revisions to the Article. This article is the property of AlixPartners, and neither the article nor any of its contents may be copied, used, or distributed to any third party without the prior written consent of AlixPartners.

WANT TO CONTINUE THE CONVERSATION?