The Airbus A320 family and Boeing’s 737 line are at the heart of the global aerospace supply chain. Bustling demand from airlines for the two competing jetliners over the last few decades set a frantic pace for the entire production ecosystem. And this beat grew at an even more furious pace in the last decade, trying to satisfy the seemingly insatiable appetite for narrow-body aircraft (figure 1). 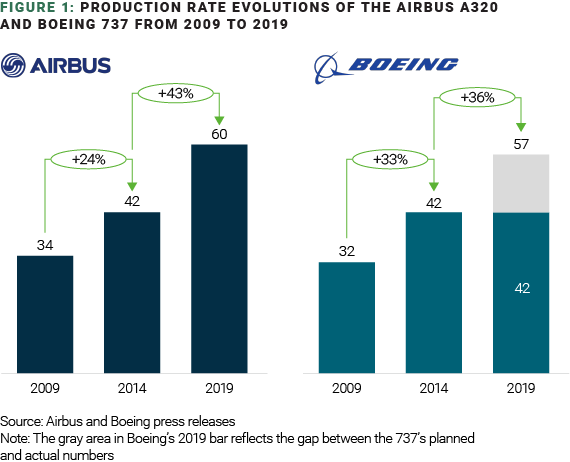 Airbus’s 2010 launch of the A320neo was a major accelerator in the market as airlines could not pass on an aircraft capable of delivering up to 15% fuel burn improvement. Boeing followed that lead by launching the 737 MAX in 2011, going on to build a backlog of more than 4,500 aircraft before the 737 MAX crisis changed everything. In December 2019, Boeing announced it was going to stop 737 MAX production, and the hiatus is now effective. Current production rate stands at zero. What does this mean for the global aerospace apparatus?

The aerospace supply chain has experienced accelerated growth driven by the narrow-body market surge. Aerospace suppliers, especially for equipment and systems, were traditionally very profitable, significantly more than aircraft original equipment manufacturers (OEMs). In recent years, however, OEMs have successfully managed to recapture a larger share of the commercial aerospace profit pool, thanks to cost reduction and redesign programs.

Every supplier fought hard to secure or extend its share on narrow-body programs, as this would secure revenues and jobs for the coming few decades. This aggressive competition soon translated into increased financial pressure. Large investments into machineries, people, and dedicated plants were required to support the ever-increasing production rates. Some of these suppliers became more fragile, with weaker balance sheets. However, their position on the 737 or A320 programs and the resulting predictable revenues were something they could – literally – take to the bank.

Since the 737 MAX production stoppage, things have changed radically. For some suppliers, this program accounts for 10-20% of overall revenues and 20-35% of overall profits (figure 2). 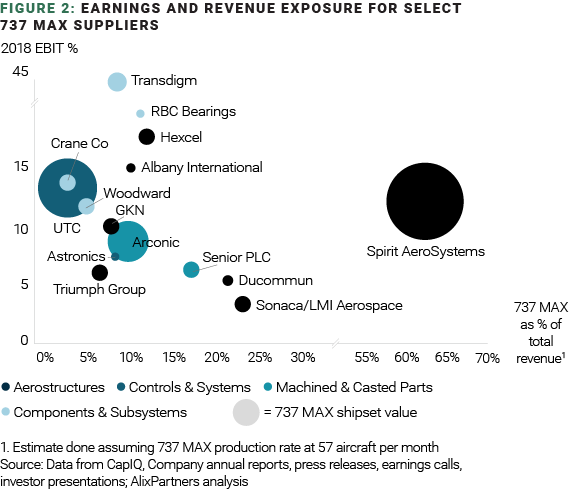 Senior PLC, for instance, is supplying a $350,000 shipset per aircraft. At a production rate of 57 shipsets per month – which had been originally planned for 2020 – this would have resulted in $240M in annual revenues. Assuming a six-month stoppage, the supplier stands to lose at least $120M in revenue.

Stopping such a massive supply chain is a big deal that will have ripple effects all the way down to the smaller suppliers. Tier 2 and Tier 3 suppliers are usually smaller and less financially solid companies. While Boeing is likely to support direct suppliers and maybe some lower-tier ones, it may have less visibility on the health status of a supplier that is critical to operations but located farther down the chain.

Without support, most of these lower-tier suppliers are likely to be forced into quickly putting drastic measures in place to limit impact on financial results. This will translate into headcount reduction, which comes with the risk of losing trained production and engineering talent or furloughing a significant part of the workforce. Holding off on new investments, capital expenditures, and maintenance support, reducing overheads, and carefully managing cash will also be on the menu.

Suppliers with significant exposure to the 737 MAX are assessing the potential impact and urgently and proactively building a mitigation plan, modeling various scenarios to determine:

When will things get back to normal?

Despite the recent increase in communication from Boeing, there is still uncertainty around when 737 MAX production will restart and at what rate. It is still not clear when the plane will get certification to resume flying in the U.S. and other parts of the world. Purging the existing inventory and then going back to the pre-crisis production rate may take up more than 24 months.

When 737 MAX production finally starts again, it likely won’t be at a rate of 57 aircraft per month, but more likely in the 15 to 25 range. Boeing, in fact, will also be busy delivering the more than 400 already-manufactured aircraft to airlines – a time- and resource-intensive task that is likely to constrain the production ramp-up.

For Boeing, increasing production back up will require planning ahead and resynchronizing the global supply chain. Forging and castings work will need to start several months before assembly, and raw materials like titanium that are used in the former process have a lead time of roughly one year. This means that decisions made by Tier 3 and 4 suppliers will affect Boeing’s 2021 production rate.

In the meantime, Airbus could keep increasing its own production, potentially adding to the supply chain pressure.

"Despite the recent increase in communication from Boeing, there is still uncertainty around when 737 MAX production will restart and at what rate."

The crisis may trigger a market consolidation

Suppliers must quickly assess how to sustain business through this stoppage, how to maintain ramp-up capabilities while preserving cash, and how to potentially take advantage of the delay to improve their overall competitiveness and come out stronger.

Suppliers that don’t may become rapidly exposed to serious cash and balance sheet issues and become targets for consolidation. Some are already seeking help. Possible eventualities include:

It is in the interest of Boeing and Airbus to preserve the supply chain, and they may have to play an active role in financing the most critical suppliers – either through loans or by accelerating payment of development costs usually recognized at shipset delivery. Not only are Boeing and Airbus most interested in a healthy and stable supply chain, they are also the most able to make investments in expanding production capacities and supporting research and development of new programs.

Aerospace executives around the world are now dealing with several dilemmas: 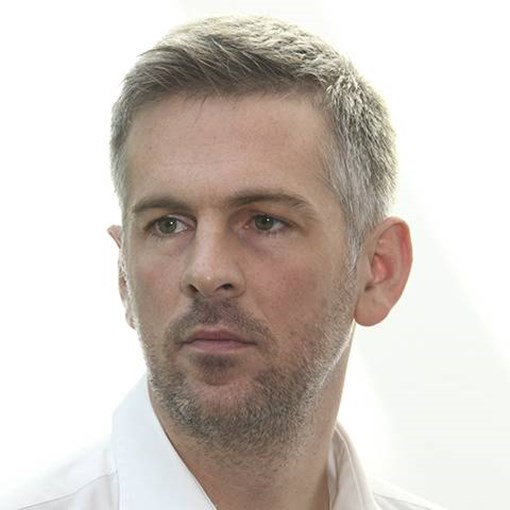 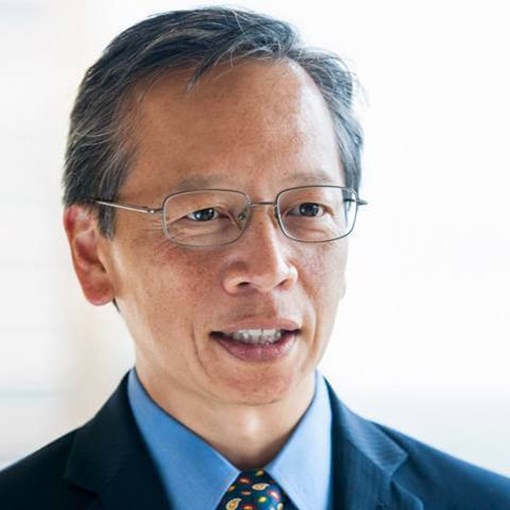 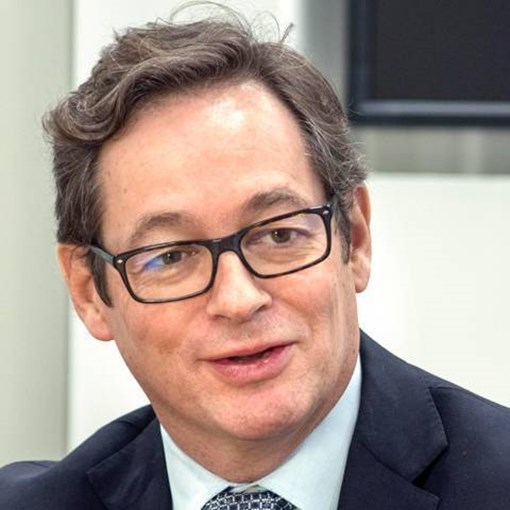 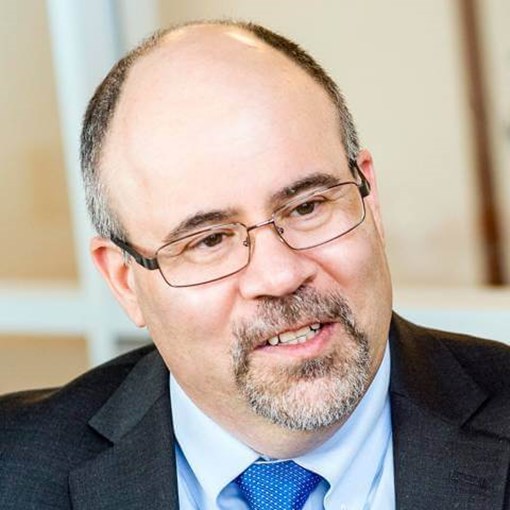 The opinions expressed are those of the author(s) and do not necessarily reflect the views of AlixPartners, LLP, its affiliates, or any of its or their respective other professionals or clients. This article regarding A&D Minute: Boeing 737 MAX hiatus causes turbulence in global aerospace supply chain (“Article”) was prepared by AlixPartners, LLP (“AlixPartners”) for general information and distribution on a strictly confidential and non-reliance basis. No one in possession of this Article may rely on any portion of this Article. This Article may be based, in whole or in part, on projections or forecasts of future events. A forecast, by its nature, is speculative and includes estimates and assumptions which may prove to be wrong. Actual results may, and frequently do, differ from those projected or forecast. The information in this Article reflects conditions and our views as of this date, all of which are subject to change. We undertake no obligation to update or provide any revisions to the Article. This article is the property of AlixPartners, and neither the article nor any of its contents may be copied, used, or distributed to any third party without the prior written consent of AlixPartners.