Data and analytics are starting to transform retail banking as standardized application programming interfaces (APIs) and data-enabled product comparisons become mainstream. The impact on banks that fail to react could be huge, but customers will benefit from a range of new services that could transform the way they manage—and even think about—their money. This article looks at how the transformation is progressing.

The first financial technology (fintech) boom, from which few start-ups other than PayPal survived, is now being succeeded by another wave of players, many of which are awash with investment. Entrepreneurs are taking advantage of access to funding from banks, angel investors, and the private-equity markets. Start-ups now focus on an array of specialties covering everything from blockchain technologies to online investing, to the use of social media sentiment data feeds for trading.1 There’s one innovation that hints at lucrative potential for would-be fintech entrepreneurs: the implementation of standardized API frameworks for retail banking. In the United Kingdom, those frameworks are driven by the demands of the Competition and Markets Authority. Similarly, the forthcoming European Payment Services Directive 2 is providing the impetus for new and open banking API standards throughout the European Union. Both have the potential to bring positive change to millions of bank account holders.This article examines how such changes might occur as the movement toward standardized, open APIs gains momentum (figure 1).

An explosion in third-party applications: The imaginations and ingenuity of app developers are limited only by the devices that host apps and by the data available to feed their creations. In a world in which customers have simultaneous access to all of their financial transaction data from all of their banking products via standardized APIs, app developers will have detailed and accurate data about:

What this means from a functionality perspective remains to be seen, but it seems inevitable that customers will have an unrivaled view of their real-time financial positions across their various bank accounts, credit cards, and mortgages. Customers are also likely to use functionality to understand, visualize, and therefore adjust their spending in ways never previously available. For example, it’s possible some apps could offer customized alerts: Say you entered a coffee shop, and an app could notify you that you’re about to reach your monthly limit on coffee expenditures. Or perhaps you’re about to use your overdraft facility, and an app tells you to transfer some money into your checking account from your savings because it would provide a cheaper option. APIs such as the Open Bank Project (www.openbankproject.com) are already addressing some of those possibilities. 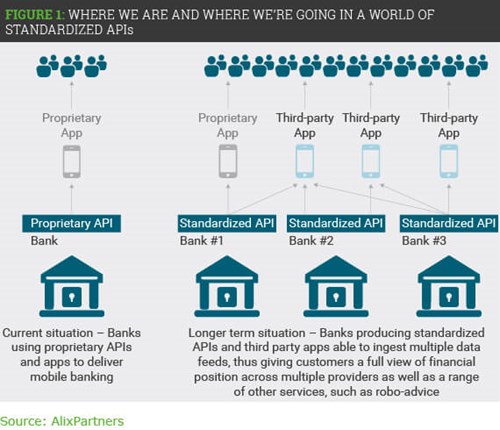 Price comparison: Part of the reason for customer inertia when it comes to checking account switching is the problem of comparing checking accounts. Bank overdraft charges are particularly complex, and customers cannot easily understand what they would have paid with an alternative provider. Giving customers access to machine-readable files of their transaction data would facilitate straightforward comparisons and enable customers to make better-informed choices about where they can get best value. Reconstructing bank account transaction data under alternative terms and conditions is complicated, and for comparisons to be meaningful, it is essential that standard rules be applied so as to avoid multiple comparison engines’ reaching various different conclusions.

Impact on the market: The impact on existing banks is hard to predict. But it’s very likely that some or all of the following will occur.

The list of examples of industries that have been disrupted by data is growing, and consumers armed with data may soon add banking to the list.

At a minimum, banks must:

Preparation is key. This second wave of transaction-data-enabled fintech innovation will bring challenges as well as opportunities for banks, but if banks evaluate the potential changes, then retaining—and collaborating with—their newly empowered customers could lead to enhanced long-term relationships.